Flying High or Not

According to the packaging the Tini-copter is a gadget but that could cover a multitude of sins. Actually it is a miniature remote controlled helicopter that has been designed and created by 50 Fifty Gifts, a company which specialises in the novelty gift market. Aimed at those aged 8 years and upwards, the Tini-copter is available in either black or red as was the review unit. 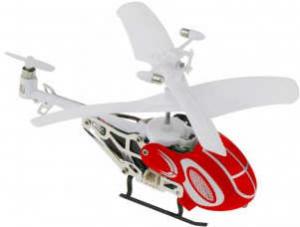 A certain amount of setting up is required with this kit once you have removed it from the packaging.  The kit consists of the Tini-copter and a remote control unit shaped a little like the letter “W”.  While the Tini-copter was held in place within the box by sellotape, the remote control was secured with two screws and what looked like some throw-away plastic pieces.  In fact these plastic pieces are spare propeller clips and the screws are reused when fastening the remote control’s battery container in position.  While on the subject of batteries, this would be the appropriate time to mention that the six AAA batteries that power the remote control are NOT supplied.  This omission is mentioned on the rear of the box so you will have no reason to complain.

The Tini-copter feels extremely flimsy with its twin rotors and a balancing pole.  This tiny bird is constructed mainly of different thicknesses of plastic with metal cut-out side frames providing the main support.  Having raised the issue of the flimsy appearance, I have to say that the Tini-copter survived a number of collisions with various structures due to pilot error on my part.

Concealed within its body, the Tini-copter has its own internal rechargeable battery.  This is charged from the remote control with this task is carried out via a charging arm which can be swivelled out from the base of the remote control.  Connecting the charging arm to a very small socket on the side of the Tini-copter is an extremely fiddly operation and did require a degree of force with the review unit.

While charging is taking place, or whenever it is switched on, a red light will glow on the remote control.  There will also be a green light that will automatically switch itself off once charging has been completed.  The charging process should take around ten minutes and this should give you between five and eight minutes of flying, or in my case, crashing time.

Before taking to the air with the Tini-copter you will probably need to tighten the rotor blades.  This will require a Philips screwdriver with a very small head.  I would recommend using a watch-maker’s screwdriver if you can get hold of one.  You will need to turn on the remote control and the Tini-copter.

Whereas the remote control power switch is clearly visible and labelled for easy identification on top of the unit, the switch for the Tini-copter is rather miniscule and is hidden away on the underside of the copter’s body towards the rear.  When switched on a light at the front of the Tini-copter will flash red and blue alternately.  It took me quite a while to find this switch as its location was not mentioned anywhere within the supplied instructions.

As mentioned earlier, the remote control is in the shape of a “W”.  The left arm holds the throttle joystick while the right arm contains the directional joystick plus trimmers to adjust forward/backward and left/right movement of the Tini-copter.  The stubby central arm is where you will find the charging arm.  Clearly labelled slider switches for on/off and the frequency selector are also located on the central arm.

As with all products of this type, you do need a fairly light touch in order to control the Tini-copter in its flight.  It is all too easy to cause your craft to crash into an obstacle or act like some demented drunken creature that has lost total control of its actions.  The Tini-copter is more suited to spacious indoor locations rather than outdoors.  50 Fifty Gift has priced this product at £30.