Bamboo has many uses but I never thought I would come across one that would involve my computer and various software mini-apps. 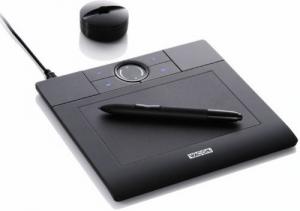 According to my Concise Oxford Dictionary, bamboo is a “Genus of tropical giant grasses; the stem, used as stick or material”.  Wacom, however, would prefer you to look on Bamboo as a family of consumer pen tablets with, as far as I can see, absolutely no connection to the natural material.  (Asus also has a Bamboo product – a notebook that is encased in bamboo.)  The Wacom Bamboo family comes in three versions, namely Bamboo, Bamboo Fun and Bamboo One.  I have been trying out Bamboo which comes with JustWrite Office.

Predominately black in colour, mixing matt and reflective areas, the Bamboo tablet measures 200 x 185 x 10mm (W x H x D) while the actual touch-sensitive portion of the device gives you an area of 154 x 95mm.  Running across the top of the work area is a panel holding Express Keys and a Touch Ring feature but more on these items a little later.  Four rubber pads on the base of the tablet help anchor it to your work area.  Completing the kit is a stylus and a circular docking station – both in black.  The size and weight (370g) makes this an easily portable device.

Setting up the Wacom tablet is straightforward.  You simply attached the device to your computer using the supplied USB lead and install the Bamboo software that is included in the package.  You can then use the combination of the stylus and Bamboo tablet as you would your mouse with some additional features.  Your mouse is still available as long as the stylus is not in contact with the tablet.

The stylus works best when held like a pen.  It has two buttons conveniently placed for easy access by a finger and a rubber for erasing data.  The upper button acts in the same way as the right mouse button by bringing up a context menu while the lower button allows you to carry out any scrolling that is required.  Left mouse button action is carried out by tapping the stylus on the tablet.  Capable of reporting on 133 positions per second, this stylus can respond to 512 levels of pressure thus enabling a smooth transition between various shades and thicknesses when putting your artistic capability (I’m sadly lacking in this respect) to the test.

While on the subject of the Bamboo’s controls, it is time to return to the panel running across the top of the tablet.  Situated in the centre of this panel is a Touch Ring.  Think iPod and you will get some idea as to how you should approach this feature.  Moving your finger around the ring in either direction causes you to zoom in and out of the current view.  North and South chevrons allow for up and down scrolling.  Positioned either side of the Touch Ring, illuminated with a blue glow, are four customisable touch sensitive controls.  By default these are set to moving backwards and forwards, show the desktop and switch between running applications.  A control panel feature lets you change the default settings.

Usually regarded as purely a drawing/sketching device, the Bamboo tablet is capable of being used for any note taking that is required.  To this end, Wacom supplies a copy of JustWrite Office.  This software adds its toolbar to Microsoft Word, Excel, Outlook and PowerPoint applications.  You can then use the Bamboo tablet to sign documents, add handwritten notes, apply sticky notes and annotate illustrations and calculations.

If you are looking for more frivolous ways to use the Bamboo tablet then you need to look no further than the Wacom website (www.wacom.eu/bamboo).  Here you will find various tools that can be downloaded free of charge.  Currently you can download a pack that contains a Mah Jongg game, Free the Bird game, on-screen doodling pad, a map on which you can add embellishments, online storage, image distorting software and ArtRage 2.  All these mini applications are available from a front-end menu.

While unsuitable, due to its small size, for any really serious work, the Wacom Bamboo is well suited for those looking for a more fun-orientated tool that could have some serious usage.  While the Wacom Bamboo tablet is not going to turn you into an artist on its own, you could have fun trying to improve your skills – I know I did.  Expect to pay in the region of £60 for this product that requires Windows 2000 and later or Mac OS X 10.3.9 and later.