Yes finally a HP unit I know its taken 18 months since their last offering but at last they have reverted to their original PR agency and so review items have started to become available to be tested, here a rather nice Ultrabook.

Available for £799
including VAT and Free Delivery 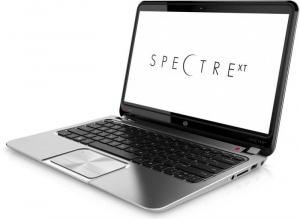 tHE HP Spectre XT Ultrabook 13-2100ea measures 31x22x1cm. The last measurement is the thickness at the front and it increases to 1.5cm at the rear. The unit weights 1410grams. It is silver grey in colour apart from the screen surround which is black but rubberised so no fingermarks show.

The viewable screen is 29.5x16.5 with a notional diagonal imperial measurement of 13.3inches. The screen resolution is 1366x768. The 1cm empty space above the screen has a webcam mounted in the centre. The screen is not overly reflective.

A 28x11cm area is occupied by the 81 key keyboard with all but the function keys being 1.5cm square. The 3cm strip behind the keyboard has the excellent Beats Audio speakers, the screen hinges and the on/off button with LED.

The 8cm strip in front of the keyboard has the 9x6cm trackpad inserted 11cm from the left and 10.5cm from the right.

My unit ran Windows 7 Home Premium 64bit version and has 4GB RAM, the Intel processor is a core i-5 1.7GHz offering. I see that now they are sold with Windows 8 pre installed.

The Hard Disc is a Samsung 120GB SSD drive with all but 15GB being the ‘C’ drive and the remainder the recovery partition.

Because it is SSD the boot time is only 15seconds and shutdown from the Desktop is 5seconds, unless you are updating. AS always the first job when a new system comes in is to do all the updates and these often take up to 90 minutes. Here however the 48 updates (in three stages) took only twenty minutes including the restarts.

The Windows Experience score is 5.9, unusually all the five categories are quite close together. Processors 6.9, RAM 5.9, Graphics 5.9, Gaming Graphics 6.4 and Hard Disc 7.9. The highest possible score it gives is 7.9.

Software installed is some Data Protection software from Absolute, Adobe Photoshop Elements 10 and Premier Elements 10, Cyberlink YouCam, Microsoft Office Starter and Norton Internet Security. Unlike most notebooks and PCs that come with 60 or 90 days this comes with a two year subscription so the total software installed is at least £200 worth.

Connections are on the left Ethernet, HDMI out, USB2 and Kensington Lock port. The front is empty, the right side has a couple of pin hole LED, headphone socket, SD card socket, USB3 port and DC input, the back is clear as the screen goes over it.

The same unit now seems to be available with Windows 8 should you want that.

While I have used Windows 8 so far it is only with a notebook of mine that has only a hard disc and was an upgrade from Windows 7 which in itself was a couple of years old so perhaps my thoughts should remain mine until I have seen a couple of units designed for Windows 8. When I have I will of course bring you my thoughts.

This was a rapid Ultrabook that responded quickly to everything I ran on it. One of the two USB ports remains live when the unit is off to allow charging of other devices. While I have not mentioned it I used it both on Ethernet and Wireless without problem and it also has Bluetooth.

The HP Envy Spectre XT is available from the link below for £799 with free next day delivery.