A long time ago in the early years of PCs there was a phrase around saying no one ever got sacked for buying IBM. While things have changed a huge amount you still see a lot of ThinkPads around in everyday use. 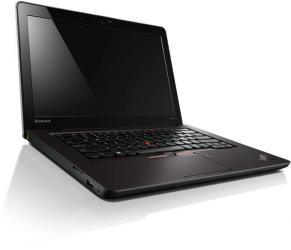 For those of more tender years IBM sold their notebooks to Lenovo who have continued to develop this winning brand. While this does not look as ‘sexy’ as some other brands the rubber coating over the skin make it feel solid and reliable the whole reason for me reproducing the comment in the introductory sentence above.

It is 35x24x2cm and weights 1865grams; it feels sturdy when you move around with it and nothing during use changes this perception. Everything is matt black even the lid the only bring are the hinges that are polished metal. Open the lid and sad to say shiny black replaces matt black around the screen, but the screen itself least avoids the mirror like finish that makes some notebooks barely readable in strong sunlight, this is better. The viewable screen is 31x17.5cm giving the notional diagonal imperial measurement of 14inches.

The right side has a mini HDMI, USB3 and Ethernet ports. The front is clear – not even an LED – while the left side has DC input, the optical drive, card port, another USB3 port and headset socket. The rear appears clear but a rubber bung more on the base than the back hides a docking port connection point which completes the connections.

There is an 85 key keyboard with the alpha keys being fullsize. Quite a bold move is to reverse the top line meaning function keys are only available when used with the ‘FN’ keys and more useful controls for volume brightness and media having the major use.

Again for those who remember the pencil erasure that resided in between the G H and B keys its still there are works as is the meaty left and right mouse buttons in front of the spacebar but there is still a touchpad (9x6.8cm) mounted 11cm from the left and 14cm from the right. Behind the keyboard are the quite powerful speakers and the on/off button. There is a fingerprint scanner to the right of the trackpad and in the centre of the screen surround a web cam. The only LED on the unit is above the i of Think Pad on the keyboard and on the lid.

It boots in 30seconds and shuts down in 13seconds. So my immediate thoughts are confirmed by a visit to device manager apart from the Hitachi hard disc there is also a small (16GB) San Disc SSD helping out to speed things up.

The hard disc appears as a 448GB ‘C’ drive with just under 16GB being the recovery section added to this to give a notional 500GB drive. You have 4GB of RAM with 3.6GB useable. The processor is an Intel i5 running at 2.5GHz.

You get Microsoft Windows 7 (64bit) as well as Media Centre activated in a unique way and some Lenovo badged tools. There are numerous other apps including access to Lenovo App Shop where you can purchase just like you would on your smartphone.

I used a range of items on this and viewed a movie or three during my test and everything worked as you would like. There are a number of trials including the normal Norton offerings as well as some games so is this a work tool or a leisure one from the content I am not sure I suppose they would like it to be all things to all.

To me this is a work tool updated to appeal to the younger market I am not sure that it will succeed but I still thing the initial quote is true today. The Lenovo ThinkPad Edge S430 is available for £1126.90 inc delivery.