This 22inch LED backlite unit has a circular base and support arm that allows much more adjustment than with other such units. It also has a range of multiple video modes for those who like the colour set to go with changes. 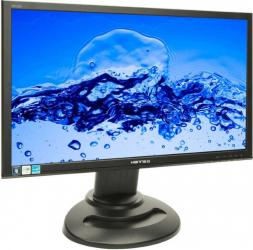 The screen surround is 51x30.5cm and the screen is 2cm thick. The base is 24x22cm and in its shipped format raises it 12cm from the desk. There is a pin in the back of the stand remove this and it can be as much as 21cm above your desk. There is no side to side or forward movement but there is plenty of back movement available.

Looking at the rear of the unit there are four connectors under the overhang from the screen mount. Power, speakers, VGA and Digital.

On the bottom right front edge of the monitor are five buttons that can alter most things about the display but in all probability once you have the contrast and brightness you like the only one you will touch will be the on/off button.

The back movement is useful if you are above the unit however with that nine centimetre height travel it would have been nice to have some forward travel, the side to side movement is not important as the whole unit is light enough to move easily from side to side.

Pressing the left button (mode) brings up a screen with options to adjust Contrast, Brightness, X Contrast and change preset mode. The figures I settled on during my test period were 75 for brightness and 69 for contrast so there is plenty more of both available.

The second option is Input setting which also has Auto Search as an option. The next icon is Colour Setting, there are three preset ones, Warm, Nature and Cool, the forth is where you select Red, Blue and Green in any number between 1 and 100 to get the choice that suits you and what you are doing. I found the default of Nature fine.

The next choice is Aspect where you can make changes to Aspect Ratio, Sharpness and Video Mode, again the defaults worked fine. The next option is on screen display settings and while there are six options again I preferred the default. The final choice is System where there are four choices and the only one most will use is to set the volume level for the inbuilt speakers, I set these to 100 (maximum) and adjusted the level on the PC to taste.

This was my main unit for a couple of weeks and then a further two weeks connected to a test PC; I used both VGA and Digital connections and was perfectly happy with both. Sound was adequate but as the speakers are built into the surround to the display they are small, adequate, but I doubt anyone would want to listen to a concert through them.

I watched videos in full HD on both PCs and even the popular dark scenes were clear and easy enough to follow.

For me the viewable screen was 21.5inches when measured diagonally but that .5inch loss also seems standard across units.

Doing my searches found the HannsG. 22inch panel HP225 for £110.70 with free delivery from the link below.