On the face of it very like the professional notebook that I recently reviewed from Samsung however despite having USB3 ports gone is the non reflective screen and back has come the normal shiny black that shows fingermarks. 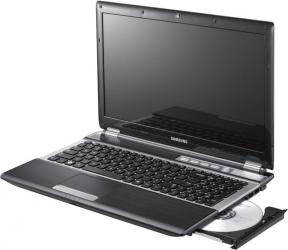 The Samsung RF510 Notebook is 38x25x3.5cm the latter is the height at the back – with case closed – this reduces to 2cm at the front. The lid opens to around 60 degrees beyond vertical. The viewable screen is 34x19.5cm giving the notional 15.6 inch measurement.

The back of the unit has no connections, the left side has the DC power input, VGA outlet, Ethernet, HDMI out, two USB3 ports and the 3.5mm microphone and earbud/headset ports. The front has an multi card socket that has been designed so that any inserted card protrudes by nearly 1cm. The right side has the DVD multi drive, two further USB3 ports and a Kensington lock socket.

The area around the keyboard is a dark slate grey and does not show fingermarks greatly. Behind the keyboard is a 3.5cm strip that has four marked buttons and the on/off button in a siver grey area that also contains the right speaker, the left speaker is in the same colour as the area in front of the keyboard and looks different.

The keyboard is 104 keys and all alpha and numeric keys (including the numeric keypad) are full sized and as they are on the solver grey background they stand out well, so in poor light those keys you need to look at are easily visible.

This was new when it arrived and the initial starts and shutdowns were a joy at 33seconds and 7seconds respectively. This however changed once the supplied Norton products were activated and 55seconds start and 13seconds shutdown is now the norm.

With Wireless on and DVD use I just about managed two and a half hours on a single charge, you will get more without either but still only around four hours. I found it fully recharged in just over two hours when switched off. However I found the default setting of ‘Sleep’ rather than shutdown produced a four second return to the desktop and only about twenty seconds when it has been left for say an overnight period or longer.

The 1366x768 screen resolution (default for this sized screen) is sharp and vibrant providing you avoid strong light from behind when reflection becomes a problem. This comes with Windows Home Premium (64 bit version). The Windows Experience score is 5.9. Made up of processor 6.9, RAM 5.9, Graphics 6.5, Gaming Graphics 6.5 and Hard Disc 5.9.

It comes with 4GB RAM, Intel i% processor 2,53GHz, NVIDIA GeForce GT 330M graphics and a TSST CD/DVD drive. The hard disc is Samsung and is 576GB in size.

The software apart from Windows are some Samsung utilities and the now normal Microsoft Office 2010 starter version. I also installed and reviewed several hardware and software products while reviewing this unit and everything worked as expected.

The USB ports were tested using a new Verbatim external hard disc. I had copied a large number and size of files to the hard disc by a USB2 drive and then removed them via the USB3 drive. The removal speed was faster.

This was a powerful unit that performed well, if you could lose the shiny lid and reflective screen and add a Blu-ray drive then I think I would have found what for me would be a near perfect system. My only other gripe is why do cards stick out from the multi card slot where others get them to fit snugly in, this could cause problems if you go to put the unit in a case possibly even damaging or removing the card without you seeing.

Doing my Internet searches found the Samsung RF510 at a best price of £769.92 from the first link below.