Here I am looking at two mice different in shape and connections. The first from Logitech the VX Nano that has a tiny wireless connector. The second from Kensington that takes shape to the extreme the SlimBlade Trackball mouse. 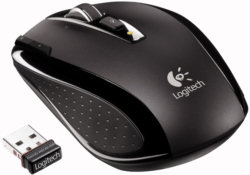 This is a small (described as for a notebook) mouse, however the real surprise is the transmitter that fits in an USB port it's so small that it fits in the base of the mouse so you just plug it in when you wish to work.

So the dimensions the mouse is a maximum of 9x6x3cm with the front edge reducing the 3cm thickness to only a single centimetre. Before I tell you about the full featured mouse the all important wireless adapter. It is less than 2cm long, 1.5cm wide and only .5cm thick. While you could leave it permanently attached in any USB port (it protrudes only .5cm by placing it in the storage compartment in the base of the mouse it stops the 2x 'AAA' batteries working so saving power. There is an on/off button on the base so the transmitter could be left plugged if you wished.

This is by no means a basic mouse, the front edges either side of the scroll wheel are the two normal mouse buttons. The scroll wheel itself not only has forward and backward use but also side to side. There is a magnifying button behind the scroll wheel and the left front edge has separate forward and back buttons. However even with the batteries inserted this rodent weighs only 87grams. Should you place the wireless unit in the base this adds 2grams to the weight. I said it was small it's also very light.

The batteries are said to last 'up to six months' but to me anyway at less than 100 grams all in it can easily fit in a pocket and travel with you. There is even a pouch provided. While designed for a notebook I also used it on my desktop (with both left and right hands) without any problems. I like a small mouse and this is both light and functional. The only danger I can see is losing the radio transmitter or leaving it plugged in to another PC, certainly if you use a rear port this is likely.

Doing my Internet searches found the Logitech VX Nano at a best price of £36.94 including free delivery from the first link below. 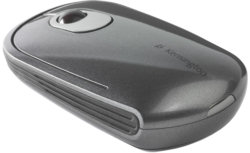 Where the rodent above was black this is gun metal grey. It is a Bluetooth mouse so your PC or notebook will need Bluetooth to work.

First setup requires that you pair the rodent with your PC/Notebook. Once you have inserted the two 'AA' batteries press the 'mode' button (behind the scroll ball) for three seconds the ball will then flash then turn the mouse over and press the pairing button on the base, your Bluetooth pairing icon in the tray should now offer the chance to pair with SlimBlade Trackball Mouse, that's it. Although the eleven language Quick Start Guide spreads the above over several pages by giving one sentence or statement in each language.

Doing my Internet searches found the Kensington SlimBlade Trackball Mouse for £51.48 from the first link below, this is still new so price could fall with availability.