It's a relief to find a vacuum cleaner that relies on how well it does it the job more than trendy looks. The Sebo Automatic X4 Pet is a high technology vacuum cleaner designed for pet owners and allergy sufferers. It's ppowerful 1300-watt motor, sealable filter bags and filtration system has earnt it the British Allergy Foundation Seal of Approval.

I'm afraid to say I had not heard of SEBO vacuum cleaners, even though they've been around for 25 years, until they sent me the SEBO X4 Pet. However, I'd now say it's a name to look out for.

Here we have a vacuum cleaner, designed for pet owners and allergy sufferers, with a very traditional look. But don't let that point you off. Unlike the popular bagless vacuum cleaners, you can't see the technology, but then again you also don't have to look at the dirt! Because it doesn't look quite so trendy as other machines out there it could be easy to miss all the fantastic technology under the bonnet including it's patented filtration system and automatic brush adjustment for different floor surfaces.

The SEBO X4 Pet has been designed to combat pet hair and dust through a combination of a powerful 1300-watt high-performance motor and SEBO’s patented multi-layer, sealable filter bags. The S-Class filtration system captures fine dust particles so they stay trapped inside the machine. SEBO tell me their X range has the highest level of filtration possible for which they have earnt the British Allergy Foundation Seal of Approval. The filtration system also uses activated carbon to minimise odour.

I really liked this cleaner. Although it looks decidedly like older vacuum cleaners, it does a fantastic job of the cleaning. The proof of the pudding for me was my teenager's room. I actually discovered the colour of the carpet after using the SEBO vacuum. Now that has to be applauded. It appeared to give the carpet a deep clean, with powerful suction, even though it uses - dare I say it - a BAG - to collect the dirt. 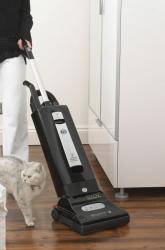 I found the SEBO incredibly easy to manoeuvre. For a slightly heavy cleaner it pulled itself along nicely across both carpet and hard floors. The SEBO has an on-board computer system which automatically raises and lowers the brush height in response to the floor surface. A display on the brush head power unit shows you when the height is changing. The display also lets you know when the head needs cleaning and when the bag is full.

The SEBO comes with a wide range of attachments including a wall and floor brush, turbo brush for stairs, radiator brush, upholstery nozzle and extension hose. Only the three most used attachments have a place to live on the cleaner itself - but I don't really see this as a problem. The attachment hose is housed in the body of the cleaner and is easy to lift out and use. I was a little disappointed that the attachment hose wasn't long enough to get to the top of the stairs though. On the plus side though it has a nice long lead - which means you won't be switching plugs every few minutes.

A question I thought might be on consumers' minds is what is the difference between bag and bagless technology.  SEBO responded:  "The SEBO X4 Pet is not a 'traditional' bag cleaner. With computer controlled height adjustment, a multi-layer bag and microfilter which runs down the side of the bag, it represents the latest vacuum cleaner technology and means that you don't have to choose between performance and hygiene, because SEBO machines offer both, unlike a bagless machine."

I found the Sebo Automatic X4 Pet for £261.61, including shipping from Amazon :

I prefer robotic vacuum cleaners. I bought http://www.youtube.com/watch?v=E-DHXQnGayk few weeks ago and it is the best.
Rating:

Great to hear your comments Clemenzina.  I've only used the SEBO for review purposes, but was very pleased with it and I'd agree about it being just as convenient as a bagless machine.  It's interesting to hear from someone who had had the SEBO for a long time!
Rating:

More than ten years ago I went to Allders to buy a Dyson but the salesperson almost insisted that I get the Sebo (the X1 at that time) and I succumbed.  It's a little heavy for me but otherwise it IS a brilliant vacuum cleaner, and if anyone is tempted by the bagless varieties I would say - (with the Sebo X1) all you do is pull out the front of the body, unclip the full bag and remove, seal it with one of the provided caps, chuck the bag straight into the wheelie bin without worrying about spillage... and clip a new bag into your Sebo.  VERY, VERY mess free.  And spares are available online, after 10 years my hose split and I ordered a new one and received it next day.