A Collection of Mystery Places

Like the previous Avanquest 4 Play Collection I reviewed recently, this next collection brings together four titles under the banner of Mystery Places. 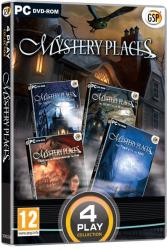 A front-end menu allows you to select each title for installation individually with the option of including a desktop icon for launching each title.  This front-end will need to be reloaded at the conclusion of each installation which is hardly a user-friendly approach.

Even after a brief look at the four titles, I would have to state that Tales from the Dragon Mountain was the most appealing and the only one I really enjoyed playing.  In this game you have the option to adjust the volume levels for background music, voice and sound effects plus whether to play the game in Easy, Casual or Adventure mode.  You can also opt for a fast or slow recharge of the Hint and Skip features.

You are cast in the role of Mina, a young woman whose favourite grandmother has died and left her an unusual medallion.  Following some strange dreams regarding het grandmother, Mina sets out to visit her grandmother’s old home and discovers she is meant to be the guardian of the magical creatures who inhabit the place.  With the help of a small green elf-like character, named Malik, you, in your guise as Mina, need to explore the house and grounds that have some unusual features.

You will need to perform several tasks as you collect the items scattered around the various scenes.  All the items you collect are automatically added to the inventory which runs across the bottom of the screen.  When necessary, objects can be combined to produce a tool which you need to complete a task.

From time to time you will need to solve puzzles.  Often these puzzles will involve recreating an object from small pieces which can be manipulated and turned to the correct orientation but there are others that could challenge you.  Along with the conversations between Malik and Mina, you will meet other creatures who are keen to talk to you.  Appropriate voices are used to represent these creatures while printed dialogue is displayed between the talking heads of the characters speaking.

Spread over six chapters, the game is occasionally interrupted by the appearance of the title screen as the next section is loaded in the background.

The Secret of Ghost Manor and The Town with No Name come from the same development team.  They feature the same two main characters of Delaware St. John and Kelly along with an assortment of spirits and ghosts.  Adjustments can be made to the volume levels for music and the character’s voices while there is a choice of having English, Spanish or no subtitles.

Both titles have a tutorial that does not let you exit until it has run its course as it explains about the different mouse cursors and the screen layout.  You have a first-person view of the various scenes as Delaware explores various locations.  Kelly, by the way, always seems to be confined to the home office from where she can provide assistance.  As you mouse cursor moves around the scenes, it will change to indicate when various actions such as move, examine or pick up are possible.

Running across the bottom of the screen is an inventory and the various tools at your disposal.  These tools consist of buttons labelled Contact, Photo and Record.  The Contact button allows you to ask Kelly for help although often the response is merely to explore and look more carefully.  The Photo and Record buttons are used to send a capture image or recorded sound to Kelly for further investigation.  There is also a small screen which gives you access to various menu features.

Apart from some occasional paranormal activity and chatter between Kelly and Delaware, both games consist of long periods of wandering around with nothing happening.  I found very little to enjoy in either game.

It may come as a surprise to you but you are a member of the Hildegard clan.  In fact you are Abigail Hildegard as you set out to find your father and wake Adalar from his dreams.  This is the situation that faces you in The Secret of the Hildegard.

Apart from adjusting the volume level of background music and sound effects, this game offers you little choice in customisation.  You can enter your name to replace the default “Player” but you are limited to the use of five letters.

Following a fairly static opening sequence with printed text, you discover that you have inherited your father’s estate even though he has only been missing for two days.  You set out to explore the family home and grounds.  This activity consists mainly of locating Hidden Object scenes.  Once found, you need to locate all the items in a text list and later silhouettes.  Often the items will be so well-integrated into the scene that you could be tempted to use the Hint feature in the shape of the Hildegard shield.  If you make too many mis-clicks then the screen will freeze for a few seconds.  Having found all the items you will be rewarded with an object that will be required later.

Following each Hidden Object scene you will be presented with a puzzle.  Part of the challenge of solving these puzzles will be working out what is required as no instructions are provided.  A Skip option is available if a puzzle proves too difficult.

Overall this collection is a mixed bag of titles.  I only really enjoyed playing one of the titles although The Secret of the Hildegards was reasonable.  Currently this collection is on special offer priced at £7.99.  System requirements call for a 1.6GHz processor with 1GB of RAM running Windows XP and later.