Based on a real location that was the home of a dead entertainer, this next game involves searching for a missing song. 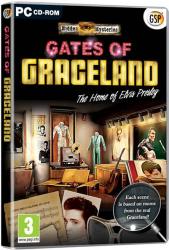 It was a case of one of those coincidences that can happen from time to time.  I had just finished reading a news article about a school putting on a musical and having to get permission to change the lyrics of an Elvis Presley because one parent had claimed it was too racy.  This situation involved an American High School (obviously not Glee) and the 1957 classic All Shook Up.  The coincidence came when I picked up the next title in the pile for review.  This was Gates of Graceland, a Hidden Object Adventure game based on the home of Elvis Presley.

As usual with games of this type, you have a choice of difficulty level.  In this case you can select from Casual or Expert mode with the former giving you a faster recharge for the Hint feature, faster appearance of the Skip option and far more helpful sparkles to indicate areas with which you can interact when playing this game.  You are cast in the role of the unnamed organiser of an Elvis Exhibition to be held at the Pop Culture Hall of Fame.

Following a brief step through time as Elvis affects the important stages in the organiser’s life, you discover evidence that there is an unpublished song written by Elvis dedicated to his mother, and scheduled to be the last big hit of his career.  According to the evidence, each verse of this song is concealed in a special place within the confines of the Graceland estate.  As part of this evidence you get the opportunity to view the first of a series of video clips, naturally involving Elvis in relaxed mood, which appear throughout the game.  And so you arrive at the Gates of Graceland in search of this lost song.

When in Adventure mode you will have a full screen view of the current scene.  Positioned across the bottom of the screen are icons to call up the game’s menu, your journal which records your discoveries, the inventory and a Hint feature in the form of a vinyl LP disk.  While the Hint feature changes to the Skip option when tackling one of the game’s puzzles, the content of the inventory will automatically change to reflect the current task on which you are working.  Items in the inventory that are linked, such as a remote control and batteries, will automatically be combined.

Not only does the journal record your discoveries but it also contains links to the various video clips that you locate around Graceland.  The journal has a map of the Graceland estate.  This map will show you your current position plus the locations that are locked and those that contain a task that needs to be completed.  It is up to you to travel between these different locations.

As you move around the rather flat view of Graceland (the program claims that it is an accurate view although some adjustments have been made to aid the game play), your cursor will change shape to indicate when different actions are possible such as examine and pick up.  As you cursor moves towards the edges of the current scene, an arrow will appear if you can exit in that direction.

Unusually the Hint feature, when used in Adventure mode, can provide assistance that covers a number of individual steps.  For example you will be guided through various rooms or locations until you reach the point where a task needs to be completed.  If this task involves an item in the inventory then both will be highlighted.  Possibly to balance this multi-step help, the Hint feature does not recharge itself while you are trying to solve one of the puzzles that form a part of this game.  The recharging waits until the puzzle have been completed or skipped before continuing on its merry way.

Hidden Object scenes, which are clearly indicated by an outbreak of sparkles, generally take one of two formats.  You will either be given a list of items to be located or a series of images that have been integrated into a scene and need to be located.  An early example of this is a number of tropical fish in an aquarium.  I found the Hidden Object play to be easier that many other titles.  Fortunately the puzzles were more challenging as you explore Graceland and even step back in time to help when Elvis originally took possession of the estate.

While the game’s graphics are hardly inspiring and the background music is rather repetitive plus the vocalist used for the missing song does not sound much like Elvis, I found myself enjoying the challenge of the game.  As for the possibility of a missing song penned by Elvis, I doubt it especially as any song writing credit assigned to Elvis was often due to the influence of Colonel Parker rather than the “King’s” creative composing ability but that should not put you off from playing the game.  Priced at £10.20, the game requires a 1.2GHz processor, 256MB of RAM and 150MB of hard disk space running Windows XP and later.