The first is a remote control that can replace several units, even those that the dog has tried to chew because you them more attention. The second a book called Vintage Tomorrows to help us all see the possible future of technology. 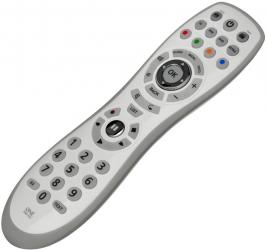 This is a universal remote control that can replace up to four devices. The second line of buttons on the control suggests, TV, PVR, DVD and extra which could be a gaming device like an X-Box an Audio system or anything else.

It has 45 keys but it is not at all crowded and for those who like to watch in subdued lighting the control is backlit.

It is 20.5x5.5x2cm, these are maximum figures and in the central waisted area its only 4cm wide. You need two ‘AAA’ batteries.

Unlike a lot of other devices this is future proofed by the setup being online. It is stated to cover 6000 brands and a total of over 300,000 models. While I do not have anything like that number to test it on I used a number of things that you certainly could not call current like a very early DVD player and an even older VHS unit all were listed and the correct information was quickly downloaded via the supplied USB cable. All you need is the make and model.

The One For All 4 is available from the link below for £14.41 with free delivery.

Not exactly the type of book I normally review they are normally ‘how to’ type offerings. This is more of a ‘fiction’ or perhaps more accurately ‘not yet fact’ type of offering but who know it may become both historical and futuristic.

At 430 pages I doubt anyone will read it from cover to cover in one go, it has been on my bedside table for several weeks.

The word Steampunk is used and while the second syllable will made some revolt this a not a book about punks in anyway. 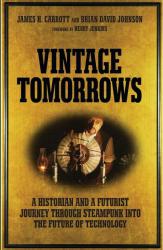 Mr Carrott is a historian and Mr Johnson a futurist, the first was a product manager for Xbox and the latter still works for Intel.

Perhaps the books theme is that Victorians made things, very clever things using their minds when something did not exist, perhaps the only people today who truly make things are the prototype designer after that plastic rules the world.

The book being written by two is a mix of quotes from the recent past often those in daily use whom most have no idea where they came from. Today everything is disposable even electrical items costing hundreds of pounds are just dumped, often still working, just because a newer version that is not totally compatible with it becomes the ‘must have’.

Most children and their parents have read Dr Seuss the quote in the book is from How the Grinch stole Christmas was only from 1966, perhaps truer today than most would like to believe. There are even things quoted from last year.

This book makes you think, you may not always agree with the authors but if they make you think like they did with me then I am sure the cost will be worthwhile.