Two for the Price of One

It is almost taking a supermarket approach as this next product offers you two titles for the price of one as you embark on Grim adventures. 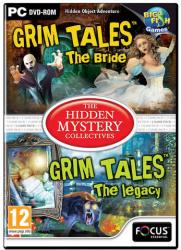 Focus Multimedia has bundled together two Grim Tales for this next offering.  To avoid any confusion I should explain that Grim Tales features stories of a somewhat gruesome nature but are not based on the work of the Brothers Grimm (note the difference in the spelling).  Making up this two-title bundle of Grim Tales are The Bride and The Legacy.  Both titles feature the same female lead as she comes to the aid of her sister first in The Bride and then later in The Legacy.

Various settings can be adjusted regarding volume levels for different aspects of the games plus whether the game will be played in full screen mode with or without a custom cursor.  There is also a choice of difficulty levels.  Rather than the usual option of two levels, the Grim Tales titles offer three levels as you select from Casual, Advanced or Hardcore modes.  While Casual and Advanced modes give you different degrees of help with sparkles, hints and a Skip feature, Hardcore provides no help whatsoever and is aimed at the experienced player looking for the hardest possible challenge.  \for the purpose of this review I stuck with Casual mode.

For the best possible experience, it is advisable to play the games in chronological order with The Bride coming first.  Not only does it help the flow of the story but The Bride does tend to be slightly easier with the numerous min-game puzzles that need to be solved.  Neither game is linear which means you are not restricted to completing tasks in a set order although you will need to complete certain tasks before you can make further progress in the game.

Both games adopt the familiar range of cursors to indicate when certain actions are possible.  A magnifying glass is used to show when you can examine an object or area more closely while a hand cursor indicates when you can take or manipulate an item.  When a cog wheel is added to a hand there is a mini-game that needs to be completed.  Directional arrows appear when you can move forwards, backwards, left or right.  Sparkles are used to pinpoint Hidden Object scenes and other areas of interest.  Hidden Object scenes follow the normal pattern of presenting a list of 12 items which can be located in a cluttered scene.

One major difference between the features found in the two games is that The Bride makes use of a Diary which automatically records your discoveries throughout the game.  The Diary sits at the right end of the game’s Inventory bar.  Replacing the Diary in The Legacy is a Map feature represented by a compass.  The map shows the layout of different areas and marks these with appropriate icons to show which has been previously visited and those where a tasks needs to be completed.  You can use the map to instantly transport yourself to any location you have already visited.

The rechargeable Hint feature used in both games sits at the opposite end of the inventory bar.  In the case of The Bride the Hint feature is in the shape of a pocket watch while The Legacy uses an image of a wolf’s head which should give you some indication as to the direction that the story line takes.  There is no penalty for indiscriminate mouse clicking when looking for clues which should reduce the use of the Hint feature.

The Bride opens as your character sets out to discover what has happened to her sister who mysteriously vanished on her wedding day.  Encountering a ghostly figure, your character is informed that she will have the opportunity to save her sister if she solves the mystery.  The follow-up title of The Legacy begins as your character arrives intending to attend the Christening of her sister’s son but finds the family home deserted although there are enough clues to indicate that werewolves are somehow involved.

Both games feature graphics of a high standard with detailed scenes and animations.  Sound effects and background music are appropriate to the style of the games while the mini-game puzzles are varied, challenging and entirely suitable for the game.  This bundle is priced at £10.20.  System specifications call for a 2.5GHz processor with 1GB of RAM and 1.5GB of hard disk space running Windows XP.