It is time to return to the scene of earthquake destruction as you join the Anderson family in an escape attempt. 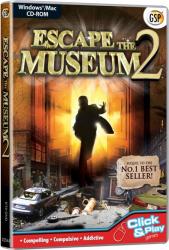 From its title you would suppose that this next game was a sequel to the GoGii developed Escape the Museum and you would be correct.  However if you were then of the opinion that Escape the Museum 2 was about being trapped and needing to plan your escape from a museum then you would be wrong although not completely.  This hidden object adventure game does involve an escape and a museum but the action concentrates on getting to the museum in order to help rescue those inside the building.

As with the original game, Escape the Museum 2 takes place following the same massive earthquake that not only caused great damage to the museum structure but to the rest of the city as well.  Power lines have been brought down, bridges collapsed and all manner of disruption affecting everything as the various elements of the rescue services kick into action.  Continuing, or perhaps in conjunction, with the origin Escape the Museum scenario, the storyline is based around the Anderson family.  While Susan the mother and Caitlin the daughter are trying to escape from the museum, David Anderson (husband and father) sets out to reach the museum to help rescue his family.  This was all explained through various telephone conversations in the original title and this sequel gives the player the opportunity to get involved ion this rescue attempt.

After grabbing his mobile phone and a local map (more for the benefit of the player as it allows you to see the required route and follow the progress as we can assume that David would know how to get to his wife’s workplace), David sets out on his journey to reach his family.  On leaving his earthquake shaken home, David meets a homeless man who takes on the role of supplying hints when called upon.  If these hints involve hidden object sessions, of which there are numerous examples of searching for ten items, a bottle is aimed at the appropriate location – obviously the homeless man is not a fan of recycling.  At other times asking for a hint will only be rewarded if you manage to find items that the homeless man requests.

Displaying scenes of destruction caused by the earthquake, the game is divided into levels what need to be completed.  There is no time limit so there is no need to rush but there is a reaction to any bouts of over-enthusiastic randomly clicking which I will return to a little later. Each level will contain tasks that often involve zooming in for a close up look at a particular area to gather inventory items as a reward for completing a hidden object session.  David also has the knack of coming across people that need to be rescues from dangerous situations.

As well as the scenes of damage, the game’s main screen has a map icon in the lower left corner and a small panel in the lower right corner.  This panel contains icons for the game’s menu, your rucksack inventory and a heart monitor.  This heart monitors reacts to the stress that your on-screen character is under.  If you are tempted to indulge in some random clicking then the heart monitor will speed up and the screen will start to have a reddish hue.

David will have conversations with the different characters he meets on his journey to the museum.  These conversations have both spoken and on-screen text dialogue.  While acknowledging the disaster that has struck, these various characters hardly show any of the signs of panic and distress that you might expect in such circumstances.

At the end of each level you receive a report on your performance.  This report gives you a star rating.  You are also informed as to the time you took completing the level, the remaining distance to the museum and your average heart rate.

I found the games slightly easier to get into that the original title this is probably due to being more repetitive.  The game’s graphics are well designed and the background sounds, such as reports from the rescue services, add to the appeal of the game.  In total there are 90 difference scenes and 30 puzzles with plenty of hidden object sessions.  Priced at £9.99, this game from hte Avanquest GSP Click & Play series requires a 600MHz processor and 256MB of RAM running Windows XP and later.