First a quality Bluetooth headset from Plantronics and second, also from Plantronics, a set of stereo headphones - also using Bluetooth connectivity. Two items with different backgrounds the first to give you clear voice communication and the second for clear audio. 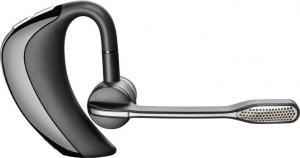 First something that's so small and light you could forget you are wearing it. In its most compact form it is 8x4x3cm and it weights just 17grams.

It works via Bluetooth and like the unit below can be charged by a supplied USB to micro USB cable however this unit is also supplied with a mains charger and an assortment of plug ends for most countries as well as a cigar lighter charger for use in the car.

Like the stereo headphones below you're provided with a Getting Started booklet containing a set of diagrams that should get you going.

On top of the earpiece are + and – volume controls and a mute button in between, the call button is where the microphone connects to the earpiece and finally the on/off switch is on the back of the unit that clips behind the ear.

The charging time before first use is 90 minutes, on subsequent charges the time should be somewhat less.

Doing my Internet searches found the Plantronics Voyager Pro at a best price of £51.30 from the first link below. 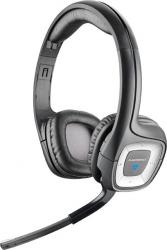 The normal problem with a quality headset is that you are tethered, here the connection is USB and wireless. So within reason you can move around, still listen to your sounds without disturbing others and of course this could be speech – such as Skype – as the headphones have a built in microphone as well, and the best thing as its USB just plug in and it works.

18x17x8cm could be the measurements but of course with headphones the size is a moveable feast. I measured the side with the microphone arm to give a maximum figure.

There is a 6cm long USB dongle that you insert in a USB port and that is it. Anything that comes out of your PC is now transmitted to the headphones. These are controlled by four controls on the outer edge of one of the headphones (the one with the microphone) with the on/off switch on the side.

They have an inbuilt solid battery that is charged via a USB to micro USB lead (supplied) four hours for the first charge and between two and four hours subsequently.

The microphone arm can be moved up level with the casing to mute it. The controls are volume up, volume down, play/pause and skip forward when listening to music.

A set of six illustrations on a single sheet of paper is the Getting Started Guide - sad to say the full user guide is only available on-line. The one warning is that the likes of iTunes must be the active window for the controls to function correctly.

I seem to remember that many years ago Philips was the first to give USB sound and it has come a very long way since then.

Doing my Internet searches found the Plantronics Audio 995 at a best price of £46.99 including free delivery from the first link below.

Hi...
I just got Plantronics Voyager Pro from my father. It is not only sounds good, but is lightweight, looks attractive, and easily for packing. I really like to use it.