Light-weight radio-controlled flying toys have been available for a couple of Christmases now. This year we look at a clever helicopter design that has the advantage of entertaining two children at the same time. 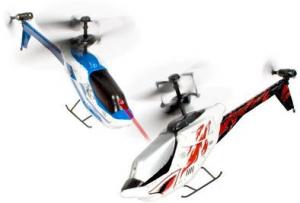 Flight has always held a fascination for many children so it's no surprise that inexpensive radio controlled flying toys have been somewhat of a hit over the last few years. Traditionally an expensive pastime, the miniaturisation of electronics, motors and lightweight construction materials has enabled this new generation of device. There have been problems though. My daughter had one such device last year (a dragonfly) which was too susceptible to wind to fly outdoors and too big to fly in the home.

Helicopters provide an alternative with their ability to hover and that's just what we see with the "Sky Challenger" product from Picooz. The box comes with 2 separate lightweight polystyrene copters and two radio controllers. Our first challenge was finding 12 'AA' batteries for the two controllers, which entailed a trip to the shop. If you decide on this for a present avoid Christmas disappointment by stocking up on batteries beforehand!

As is common with these devices, each helicopter comes with an integrated Lithium-Polymer battery that is charged via a short lead from the controller. A full charge will take between 20 and 30 minutes and we were a little concerned that would only give 5-6 minutes flight time. In practice, it's very unusual to be in the air continuously for 5 minutes without either crashing or making a controlled landing and so a full charge provided significantly more than five minutes play time. For practice of course you can have one copter on charge while you fly the other.

The radio controller has two joysticks - one acts as the throttle, the other left-right turn. Your first task, having given your chosen Helicopter a full charge, is to get it to take off and hover. Generally when you try this you'll find the helicopter spins quickly in one direction requiring judicious use of a trim controller to get it stable. It was slightly annoying to have to do this every time you start from a fresh charge - but you fairly quickly adjust.

Once you've mastered hovering the next challenge to actually fly somewhere. This is a lot more difficult than you'd expect. To fly forward you must make a 'clockwise' turn. Once moving forward you then counter the turn with a counter-clockwise jab at the controller. Flight thereby consists of repeated left-right movements. This is not something that comes easily, but is by no means impossible. You do get a real sense of achievement when you make your first controlled take-off and landing! 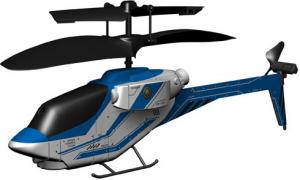 We did find that these very light-weight helicopters are somewhat susceptible to 'fluff' - which seemed to attract itself to the rear stabilising rotor. The symptom is that no matter what you do with the trim control the plane flies completely out of control. The rear propeller can be carefully eased from it's shaft and the accumulated fluff removed from the spindle. For the main blade we found a pair of tweezers very useful. This was not mentioned in the trouble-shooting guide, but maybe the developers didn't field test their product in a house with four cats!

Once you and, of course, the child for whom you bought this product (!) have mastered flying the Sky Challenger offers an additional attraction - the opportunity to shoot down the other helicopter! With both in the air, aim your plane at your opponents and then press the 'fire' buttons on the remote. As long as you're in line, and within at most 2m of your opponent it will fall from the sky - accompanied by your cheers!

Despite the very light-weight nature of these products they are amazingly robust. My 11 year old daughter and I have managed numerous completely uncontrolled crashes with no damage to either craft. My greatest concern was when our 19 year old cat decided to turn kitten and pounced (albeit slowly) during a low-level hover and gave it a good maul. Although this resulted in a few tooth and claw marks the place continued to fly perfectly.

A great product that is a lot of fun for children of any age, including us very old children. My daughter has played extensively with hers and had a great deal of fun!

The recommended price is £49.99, but at £29.23 from Amazon, including shipping the Piccoz Sky Challenger make an excellent Christmas gift :