Funkix - Get Your Kix Indoors and Out

Here is a neat little toy that would make a great value extra present at Christmas and keep the kids exercising even indoors in the cold months.

Digi, Flash and Sonic
all £9.99 from Amazon
including shipping 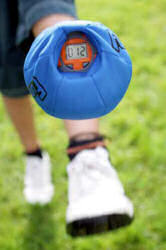 Funkix is described as a technology filled Sports Sack. Derived from an 80's craze, the multi-million selling "Hacky Sack" the Funkix takes this concept and moves it into the twenty-first century. There are three different types, all shaped like a mini football with a different 'technology centre'.

All of them are designed to be thrown, kicked or juggled and aimed squarely at the 'kid' in all of us - big or small. As a general rule each different Funkix does it's thing on impact, either with a wall or part of the body.

First up there's the white Funkix Flash that has a blue LED light at the centre, which lights up on impact, or can be set to flash or strobe.

Next is the Funkix Digi that counts the number of hits or kicks and displays on an integral LCD display. For many of the tricks this is actually the most challenging, providing both a personal challenge to keep it moving and potentially the seed of a competitive challenge between friends.

Last but not least we have the Funkix Sonic, the teaser of the three, onto which you can record your own sound onto which and plays it back on impact. Depending on who has this it can be a lot of fun - or very quickly irritating as hell, as we found when the kids started to play!

They are quite cute. We liked the one with sounds because it makes you giggle (initially at least), and the one that counts is great for competitions between kids. It stores several scores so you can see the one who got the high score on the display.

What's perhaps best about them is that you can play indoors with them, hitting up against a wall, playing catch or football (mind the ornaments!), juggle or dream up your own indoor ball game. Whilst it's not guaranteed that you won't knock an ornament over, the Funkix is much more indoor friendly than an ordinary ball and each has a fun feature as well.

At £9.99 I'd say they'd make a excellent stocking present and should keep the big kids in your family entertained before dinner, and potentially help afterwards as the exercise might just mitigate the effect of that extra helping of Christmas pud! For those that are struggling with the concept, and my description of the Funkix, take a look at the promotional video on the following URL :