Audio output is often a neglected aspect with a computer purchase which opens the door for considering a dedicated speaker set.

The letter "X" is becoming increasingly popular when naming computer items.  Quickly checking around reveals that both software and hardware products have jumped onto this particular bandwagon.  We have operating systems using this letter; various applications use the "X" in their version number; and, of course, there is that popular game console from the giant of Redmond.  Speakers have even joined this club with Logitech developing its X-series of which the X-540 forms part and is the subject of this review. 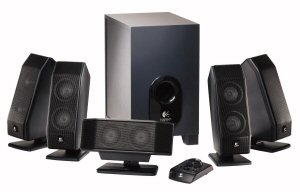 Opening the box, it is amazing how those three little words engenders visions of Christmas morning, containing this 5.1 surround sound system revealed a subwoofer; central speaker; four additional satellite speakers; remote control; and various leads all in matching black livery.  By the time I got everything unpacked, I had become an expert at removing sticky tape and the plastic bags that were protecting the various components.  My trusty tape measure then unrolled into action as various dimensions were recorded.

The subwoofer (285 x 165 x 240mm) is permanently attached to a remote control device (more of this item later) via a 170cm lead and is meant to be floor-mounted.  As its main cone, pumping out its 25 watts, is positioned on the base of the unit and is not protected by a grille, some care does need to be taken when handling the subwoofer.  The back of this unit houses the remote control lead and the various connection sockets for the speakers and the leads connecting to a computer or HiFi system.  Don't worry about getting confused over which socket to use as they are labelled and colour-coded to match the plugs for each component.

Using matrix surround-sound technology, Logitech provides a central speaker (198 x 80 x 94mm), easily identified because of its horizontal orientation, which can be mounted on the top of a flat-panel display and can be held in place by its swivel base, or positioned appropriate elsewhere.  This speaker has a 224cm length lead which should be ample for most eventualities.

The four satellite speakers (220 x 106 x 80mm) also have swivel bases that allow them to be either wall-mounted or positioned on a flat surface.  Two of the satellites are for front right (red plug) and front left (yellow plug) with leads of approximately 164cm.  The other two satellites are the rear left (black plug) and rear right (white plug) with leads measuring 437cm.  Completing the package are a 214cm power lead; 194cm triple-headed connection lead for linking to a computer; and a small single to double jack adapter.

Connecting everything together is a simple process.  Unfortunately you do have the problem of positioning the various satellites in such a way that the connecting leads are not a danger to life and limb.  I would advise some pre-planning as to where you intend to feed the different leads to avoid unsightly mess and to make sure they are not likely to trip up somebody.

Once everything is connected then the remote device comes into its own.  Two buttons allow you to switch on/off power and turn on support for matrix surround-sound feature.  A large knob controls the volume level while a small knob is used for adjusting the bass.  The remote also provides a socket for connecting headphones.

The 70 watt output achieved by this speaker set is quite reasonable with fully rounded sound and clarity but the quality does depend greatly upon the source material.  Games and soundtracks that support surround-sound are fine and even MP3 files can benefit from the overall effect of using this Logitech kit.  The X-540 can form part of a HiFi system and should not look out of place in the living room but the product's real strength lies in providing audio output from your computer whether your tastes are for games, music or movies.  Pricing has been set in the region of £70.