A small 15x10cm photo printer with a limited range of features, however should you just want to print images direct from a camera card it gives acceptable results. 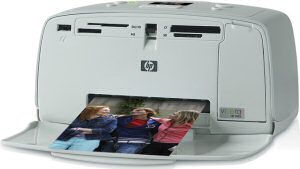 It is 22x12x12cm when closed, when in use the front opens down to provide a tray for printed images and the top of the back opens at an angle to allow a few sheets of 15x10cm photo paper to be inserted ready to print.

For a single cartridge - three ink - printer the produced images are good. However I note the claimed print speed of 1 minute for a 15x10cm image. Certainly this was not achieved in my tests the time from pressing print to a produced image was only a tad short of two minutes.

A lot of small printers like this are really a 'photo lab' however there is no manipulation available with this unit. The only choice is one, two or four images per sheet. A lot of units allow you to select part of an image or even some control over exactly what section of the image will print, not so here.

Yes there is software and all this can be done on the PC but surely this negates the purpose of the card slots on the printer.

The top of the unit has four single purpose buttons and a toggle button either side of a single use one. The internal choices are small as indeed is the TFT display 3.5x3cm and indeed not all of that is used to display images. Another minus point is that you need to move to it as the TFT is fixed flat in the top of the unit. 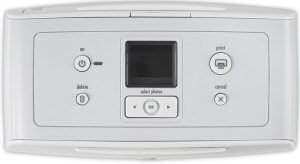 It can produce Panoramic images but this is the only feature that takes this above the very basic of photo printers. It claims to have five photo slots with XD being inserted upside down in the Smart Media slot but really it's just the standard four slots. There is a Pict Bridge slot but it cannot accept Bluetooth.

Yes a lot of what I have mentioned is available on more expensive and full featured units however I find the HP Photosmart 335 rather disappointing. Maybe a year or so ago doing the basics well would have been enough, now most expect more and certainly I have looked at several HP photo printers that seem to do it all.

Around two minutes for a 15x10cm image is not quick, I cannot work out the 60second claim as normally I only find difficulty with the claimed print speeds for text printing on A4 printers. While the quality is acceptable and the printed images emerge all but dry I think there are other better printers out there. Perhaps the price will be ultra low?

Doing my Internet searches found it at £37.99 from the link below. However I have reviewed several other photo printers and those strike me as better buys unless you want a really basic photo printer.