These days kids seem to be using such devices before they can walk. So the age level suggested seem almost pointless to mention. The only mention on the box is a circular road sign with a picture of a young person and a red line. The age beside it is 0-3. 4+ is mentioned on the side of the box, at four most children know far more. 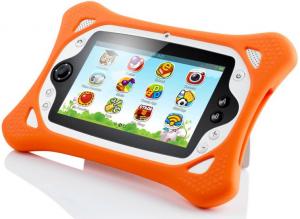 I was on a bus the other day and a baby in a pram was given a smartphone by its mother and it immediately started pushing the screen, I was the wrong side to see what it was doing but as the baby – about 6-9 months -seemed happy it was not I assume the first time it had seen it.

At 285grams I would consider this seven inch offering too big for a child that age but at 3 years – or maybe a lot less – I am sure some of the games and other items would engage.

It is 18x12x1cm, the viewable screen is 15.5x8.7cm giving the notional diagonal imperial measurement of 7inches.

Assuming you are holding the tablet in Landscape format all the buttons and connections are down the right side. On/off, volume up, volume down, DC input, micro USB, micro SD card slot and 3.5mm headphone socket. The tablet is supplied with a tough rubberised outer skin so even if the child drops it no damage should occur. In has a camera, speakers and as its touchscreen a finger or the supplied stylus can be used.

On first switch on you need to setup Wi-Fi and then enter the child’s name and age. You also need to setup the parent’s password and for some reason it asks if you are the mother or father of the child. During my tests I have yet to find a reason for that.

The AppStar skin is over a standard Android system but the only way that can be accessed is by entering the parent’s password.

The front screen has eight icons, KidzStar Store, Coloring, Binatone Retro, Burn The Rope, Music, Gallery, MeeGenius and Hangman. The normal dots make up the way to the App Screen which has 41 items on it.

The child can get to a small proportion of the Internet that has a range of games etc.

In order to get to the vast majority of the Internet you have to backtrack to the front screen and press a button that has three choices all of which require the parent password to be entered. Select Age Group, Parent Controls and Device Settings.

The Age Group is useful as the child grows older so more appropriate games and even school work up to year 5 can be accessed. Parent Control allow Apps to be chosen or removed, gives access to the Tablets settings and also Browser where the whole of the WWW is accessible.

No matter which part of the interface you are in when you shutdown it will always restart in the Child section. Bootup is just over 35 seconds to the eight icon front screen. Shutdown is only 5 seconds.

There have been a number of stories around about children spending obscene amounts of money on games as they are clever enough to know their parents password. While you are encouraged to enter a credit card it is possible to play the majority of games – some in only limited format – without entering one and therefore no unexpected bills.

The Binatone AppStar 7 Tablet is available from the link below - or in their stores - for £99.99.

Just reduced to half price in their sale so now only £49.99.