If you're one of those people that have to interact with virtual 3D worlds it's quite possible that you'll find using a mouse and keyboard either frustrating, limiting or both. A 2D pointing device just doesn't give enough flexibility to move in a 3D world. 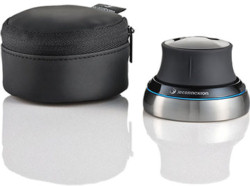 The solution proposed by 3Dconnexion, a division of Logitech best known for their mice and keyboards, is the SpaceNavigator, described as a 3D mouse. We reviewed the SpaceNavigator back in September 2007 (you can read that review here).

3Dconnexion have now released a smaller, lighter Navigator - for notebooks.

To recap - the SpaceNavigator in a single hand control allows you to : pan, zoom, tilt, spin, roll, move. The best way to think about the movement is to thnk about how a helicopter moves. All of the movements you can imagine are covered by the Navigator without having to use the mouse or keyboard.

Specific drivers are provided for a wide range of applications, primarily for Windows but also for Linux and Mac OS X. It's good to see that since our last review the list of supported applications has increased. Click here to see the full list on the 3Dconnexion site.

In my last review I suggested the SpaceNavigator would make an excellent game controller for 3D games. There hasn't been a lot of movement in this direction, although it's interesting that Second Life is now supported. 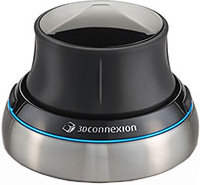 The most common supported application that non-professional will be aware of is Google Earth. With a little practice the single control will allow you to fly all around the world. It's a little unfortunate that the flight simulator in the latest release is yet to be supported, but I'm sure that will come.

Functionally the new notebook version of the product is identical to the original. The changes are in the physical design. The weight has been reduced to 50% of it's big brother and the size is reduced accordingly. The biggest saving has been achieved by reducing the weight of the base. While this is necessary for a notebook product, it does make the navigator more difficult to use. I found I often had to effectively hold the base down while moving - something that wasn't necessary with the larger desktop version.

The desk-top version is still going to be the best option for those using the SpaceNavigator on a regular basis, for example in design work. The Notebook version would be well suited as a second product to take on the road to walk customers around designs.

The original product is available in both "Personal Edition" and "Standard Edition". The former providing a license to use the product for non-commercial use. It would appear that 3Dconnexion do not expect to sell this version for personal use as no "PE" version is available. The price direct from 3Dconnexion is £107.10, which I found surprising - the notebook version is a compromise between usability and portability - unless you really can't manage the extra 250g weight then even on the road the desktop version is the better choice. The notebook version is functionally identical but has reduced weight, is slightly more difficult to use and yet is 30% more expensive (the desktop version being only £82.11). I also note that the US price is around $129 - such a disparity in price with the current exchange rate is difficult to justify so I've marked the product down in value smilies.

Full details of the 3Dconnextion SpaceNavigator Notebook edition is available on the following link :