Here is a fascinating game with myriad possibilities for kids through to adults - a chequerboard puzzle of 18 pieces which cover 64 squares in 101 different challenging combinations. 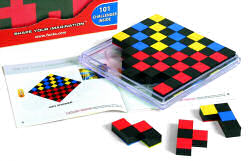 The Kaleidscope Classic is part puzzle, part strategy game, and can be played by an individual or up to 3 people. It has taken 20 man-years to develop and is the work of two Australians: Inventor / psychologist, Dr. Mark T Wood and mathematician / physicist, Frank H Dyksterhuis.

When you unwrap it, the Kaleidoscope Classic looks like a chequerboard of black and red squares. Although there are 64 squares on the board, these are made up of just 18 pieces - each unique and with different patterns on each side (the reverse side has red, black, yellow and blue squares).

There are monominoes (single squares), dominoes (2 squares), trominoes (3 squares), tetrominoes (4 suqares) and just one octominoe made up of 8 squares. Once you tip these out of the box, it's an awful lot harder to get them back into chequerboard shape.

Playing as an individual, there are 101 patterns in the book of varying difficulty. Solutions are given for just the even numbered challenges in the back of the book - you're on your own for the odd numbered ones.

The strategy game with it's own name - enKounter - uses the 18 pieces with 4 separate pattern boards. The squares on the pattern boards have score values of between 1 and 4. The 18 pieces are divided between 2 or 3 players, and the aim is to put your pieces down on places that match your pieces, to get the maximum possible score. The game continues until no-one can move and the highest scorer wins.

Kaleidoscope is extremely challenging both in single player and strategy modes. However, how often can you say that a game will entertain your children every evening. My daughter grabbed the board and pieces every evening for a week, and thoroughly enjoyed outwitting herself!! I think she's having a rest now!

There is also an on-line subscription version of the game at http://www.brain-ed.co.uk

I've given this game a 5 * 5 award because I can't find a fault with it. It's a very clever game that is as easily played by children as by adults. There are varying ranges of difficulty, so those with high a IQ will stay as interested as the kids. There's a large number of challenges and it can be used by individuals, or as a group game. Although the challenges are not easy to solve, the game is easy to understand.  It's a sturdy game as the pieces are made of thick plastic - so it will last. And at £17.99, I really do believe the potential play time you will get out of this game makes it fantastic value.