Giving my keyboard and mouse a rest from the usual pounding gave me the opportunity to check out an offering from Logitech. 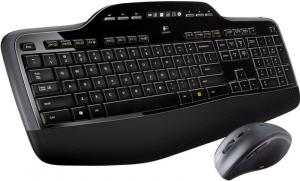 Although originally known as “The Mouse Company”, Logitech has since expanding its product range into other areas of computing peripherals and technology.  However the company has not abandoned its roots and still produces various mice and their keyboard companions.  One such combination is the Wireless Desktop MK710 offering which comes with the promise of delivering up to 3 years of battery life – a claim that I have been unable to test fully due to time constraints.

The MK710 kits consists of an MK700 keyboard, MK705 mouse, nano receiver using 2.4GHz wireless technology, a USB extension lead, set of AA batteries, software CD and printed Getting Started Guide.  Both the keyboard and mouse are powered by two AA batteries and have a dedicated on/off switch to help conserve power when the device is not to be used for a period.  For some reason the batteries for the keyboard were already in place, leaving me the task of inserting two AA batteries into the mouse.

Once the nano receiver has been introduced to your computer, either directly into a USB port or in company with the 150cm USB extension lead, it should take just a few seconds for both devices to be recognised and available for use with the computer.  By installing the supplied software you will gain access to some special features and be able to customise various features of the keyboard and mouse.

The MK700 keyboard has a curved stylish appearance that is somewhat marred by the cramped arrangement of the main QWERTY section of the unit.  The individual keys are almost flush to the body of the keyboard.  Most of the keys are present in the position I am use to with “Old Faithful” - a Logitech keyboard of a previous generation that has stood me in good stead over the years.  There are a couple of exceptions.  The right Windows key has been replaced by a large FN key that also displaces the Calculator key which has been moved to the top right corner just above the standard number pad.  The FN key gives you access to the secondary action available from the rather small Function keys.

Running across the top of the keyboard are media control buttons positioned either side of a slim-line LCD panel providing feedback as to battery life plus Caps, Number and Scroll Lock indicators.  While I am happy to work without a wrist-rest, others could well appreciate the integrated padded element that forms the bottom of the keyboard.  Two pairs of retractable feet on the base of the keyboard allow you to incline the unit at either 4 or 8 degrees.  This keyboard would struggle to persuade me to abandon “Old Faithful”.

The mouse features the standard two button arrangement located on either side of a wheel that allows backward, forward and sideway scrolling.  Immediately on picking up the MK705 mouse, you realise that it has been designed specifically for the right-handed user.  Not only do the curves of this unit fit more comfortably in the right hand but there are two additional buttons that are conveniently positioned for being activated by the right-hander’s thumb.  Trying to activate these buttons with your little finger, as a left-handed person might need to do, is extremely difficult and uncomfortable.  These buttons provide backwards and forwards functionality.

This same side of the mouse also has a feature which allows you to switch between opened applications.  You could almost miss this button as it is just a very small strip located at the bottom of this side at.  Using this feature does take a little getting use to before you master it. You can store the nano receiver in the mouse’s battery compartment when not required. Generally I found the mouse more amenable to my way of working than the keyboard.

The Logitech Wireless Desktop Set is priced at £89.99 which does seem a little high for the functionality offered by this product.