This is a thin and light Windows 8 notebook that boots very quickly and for me anyway cures the problem of fingermarks around the screen by making the whole thing in silver grey rather than the standard shiny black finish. 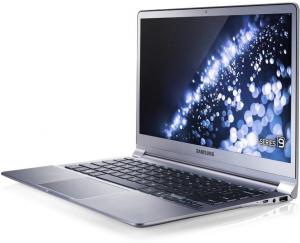 Because of the size there are special leads to connect certain standard things. The left side has the DC input, a USB3 socket, next two of the special connections for HDMI and Ethernet. The front is clear and the right side has an SD card port on a flip open door that is more on the base than the side, pin hole microphone, another special socket for VGA, a standard 3.5mm socket for a headset and finally a USB2 port. The rear is also clear as the lid goes down to around 160degrees.

As stated the whole unit is a silver grey colour and while of course fingermarks are still there they do not show. The screen is also far less shiny than most. The viewable screen is 29.5x16.7cm giving the notional imperial diagonal measurement of 13.3inches. Mounted in the centre of the top screen surround is a web cam.

Once you have set it up the boot becomes very fast at 5seconds and the shutdown is only 3secons. Windows can be fast all you need is an SSD drive. The options seem to be 256GB or 512GB, the unit in my test unit was only 100GB.

The processor is an Intel i5 running at 1.4GHz, it has 4GB or RAM, the version of Windows 8 (64bit) but it does not have touch.

Apart from the standard trial version of security software there were a few Samsung utilities.

As often happens the exact model I was sent does not seem to conform to anything you can see on Samsung’s site, first the rather nice silver grey finish seems only to be available as Mineral Ash Black. Second the 1.4GHz processor seems to be a far faster 1.7GHz offering. I can only review what I get and I would be very happy with what I was sent for speed – although the larger SSD options would be an advantage – I got very close to nine hours of general use with Wi-Fi but I must think that the faster processor and larger SSD would impact slightly on the figure I got from it. I did however find the model I was sent on Amazon and the only difference is that the SSD is a more normal 128GB.

I found this responsive and light and easy to take with you, you would have to remember the various adapter cables if you wanted to connect to an external monitor or use it with Ethernet. It is stated to be the world thinnest and for that the lack of full size external connections is the price you must pay.

The almost identical model I was sent is sold below for £855.12 including delivery.

Strangely Samsung only have the 900X3E shown on their site which is probably a more recent model and as stated does have higher specifications but at a higher price.