A small notebook from Acer that I assume is aimed more at the office market as joy of joys no shiny screen surround to show your fingermarks. It also comes with a rather large battery that protrudes down at the rear of it. 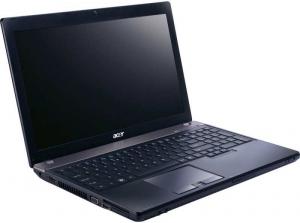 The Acer TravelMate P^ (TMP633) measures 32x22x1.5cm at the front but this swells as you go back culminating at 4cm at the back where the battery is, it weights just 2kilos. I assume there must be another configuration with a smaller battery as the back pair of rubber feet never sit on the desk.

The left side has the Kensington Lock socket, DC power input, two USB3 ports, SD Card and Express Card ports. The front has three LED’s on the left and an orange LED with slider switch to turn Wireless on/off. The right side has headphone and microphone sockets, a USB3 port, eSATA connection, HDMI port, VGA and Ethernet.

The screen goes back to around 170 degrees – the battery stops it going further – and or course there are no connections. The viewable screen is 29x16.5cm which gives the notional imperial measurement of 13.3 inches. While on the screen it is not nearly as reflective as those found on less expensive offerings, I wish they were all like this.

The base has a rubber bung hiding a external connector or some sort but as this was not supplied I can only guess as its purpose.

My unit was matt black with the exception of the front of the case – rear of the screen – which has a diagonal stripe pattern in three shades of grey very subtle.

It has 4GB or RAM, Windows 7 Professional, Intel Core i5 processor running at 2.5GHz with a 300GB hard disc.

Due to certain time restrictions some tests of mine could not be completed one interesting one that was possible due to an illness just after it arrived that while fully charged and not used for seven days it only lost 2% of battery which is very good. Boot time is 65seconds and shutdown from Desktop is 20seconds.

Looking at the Acer site I see they do SSD versions as well as Hard Disc and this would improve greatly the bootup time. As a business machine security is high on the agenda and from the software included this is well catered for. The stated battery life of ‘up to 8 hours’ should be possible with the oversized battery that I was sent.

The Acer TravelMate P6 is available from the link below for £699.97 and of course should you want it you qualify for an upgrade to Windows 8 for £14.99 and then claim that back from Acer.