Need to dock your Apple iPad? 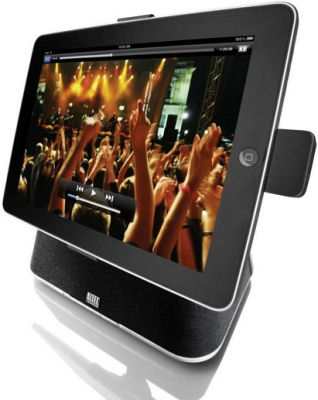 A whole industry has been built around producing docking stations in various forms for various generations of Apple's iPod and iPhones. These products benefited from the universal docking connector adopted by Apple and so each product could support the entire range.

The iPad is a little different - it's bigger. There are bigger iPods of course but not that big. And while the iPad is ideally used on the move to do 'visual' things on that beautiful screen, there are times when you just want to listen t0 music or watch a movie in the kitchen while you cook. In short - you need an iPad docking station.

Recognising  this need Altec Lansing have just launched their new Octiv 450 iPad docking station. In many ways resembling it's iPod cousins, and of course being perfectly compatible with iPods, the Octiv 450 provides the ability to rotate your iPad through 90° supporting landscape and portrait viewing. You can also tilt the screen between almost vertical and almost horizontal allowing for comfortable viewing whatever the situation. And to save you having to reach over to your docked iPad Altec-Lansing have also provided a full featured remote control.

We expect to see a whole wealth of iPad accessories grow around this latest hit product from the Apple stable. In the mean time the Octiv 840 will be available from stores including Apple and John Lewis from the 1st December with a MSRP of £129.99.