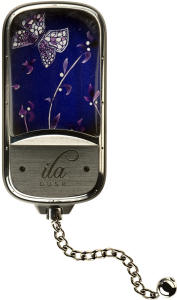 Security alarms for women are not a new concept. They are however a very good idea, particularly at this time of year when almost the only time you're outdoors is when it's dark!

Alarms though have often been very utilitarian - very little effort being put into make it attractive. It's an alarm, right? Well the problem with that is it'll be stuffed in the bottom of a bag or deep in a pocket and should it be required, difficult to find.

"ila Dusk" takes the alarm concept and make two changes. The first is to make it actually look good so that it's more of an accessory than a utility (of course looks are in the eye of the beholder and being both male and colour blind I'm probably not the best judge). It's fashioned such that it can be attached to a bunch of keys or to a handbag.

The second is the alarm itself.

There are alarms every where. Burgular alarms, car alarms, alarms alarms and more alarms. Many are simply ignored as a false alarm.

The ila Dusk (a literal translation from Sanscrit of "Goddess of Speech") uses a high pitched female screech rather than a mechanical sound. The sound is truly terrifying and very loud.It's also very easy to use - much like a hand grenade simply tug on the chain to remove a pin and off it goes.

I'm considering giving each of my daughters one for those times now, as the get older, where they are walking to clubs or to friends.

The ila Dusk is available from Marks and Spenser for £19.50 with one of three visual colour schemes.