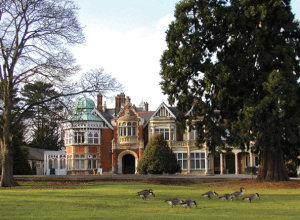 For those of you unfamiliar with Bletchley Park, and surely there must be less such people with each passing day, this place was arguably the birthplace of much of the technology behind many of the gizmos we review here on GadgetSpeak. During the war Bletchley housed the brains that broke the German Enigma code and did much to shorten the duration of the war.

Situated just outside Milton Keynes the Bletchley Park mansion stands proudly amongst the remnants of the former war-time huts that housed such luminaries as Alan Turing. In complete secrecy teams of highly skilled mathematicians worked here on breaking the war time coded messages flowing between elements of the German army. The codes were complicated and the need to break them urgent. As in many previous times the urgency of war fired human creativity to drive advances in electronic and mechanical engineering that would form the foundation of the modern computer. The same basic concepts you'll find now shrunk many thousands of times in your phone, media player or computer.

That was then. After the war the secrets were kept - on Churchills direct orders everything that could give away the part Bletchley played in the war was destroyed and those that worked there sworn to secrecy. It wasn't until the mid '70s that the story of Bletchley was told and the achievements of those involved became clear.

Despite plans in the early '90s to demolish the site to make way for a housing development, Bletchley survived. Just. Time has now played it's part and the mansion and the huts are crumbling. Various avenues of funding have been followed only to be denied. After a vociferous campaign including petitions to government, questions in the Lords and the support of notable celebrities the Heritage Lottery Fund today announced an initial funding of £500,000 pounds. £10m is required to restore the site and to ensure it's future as a world heritage and educational centre.

For all you Gadget fans out there Bletchley is a brilliant place to visit. The site plays host to the National Museum of Computing. For those of you that remember a time before the Apple Mac and the IBM PC you'll be able to see examples of the myriad of weird and wonderful machines that led them.There are 50 different 'personal computers' on display including iconic UK machines such as Sinclair ZX80 (I still have mine in the loft), BBC micro and the Dragon 32. From further afield you'll find a Commodore PET and a Tandy/Radio Shack TRS80.

For those that like their computers BIG you can gaze at a PDP-8 mini and and ICL 2900 along with a recently acquired and currently being rennovated Harwell Dekatron Computer - apparently the world's oldest complete computer.

If you're reasonably local or are visiting the area then do take the opportunity to visit and show your support. I you have any interest in technology you'll have a highly enjoyable day.

If you want to help the Bletchley Trust raise the funds it needs to keep the site going then you can make a donation on their site. They also have a great range of gift ideas from their shop that could just be perfect for someone you know!